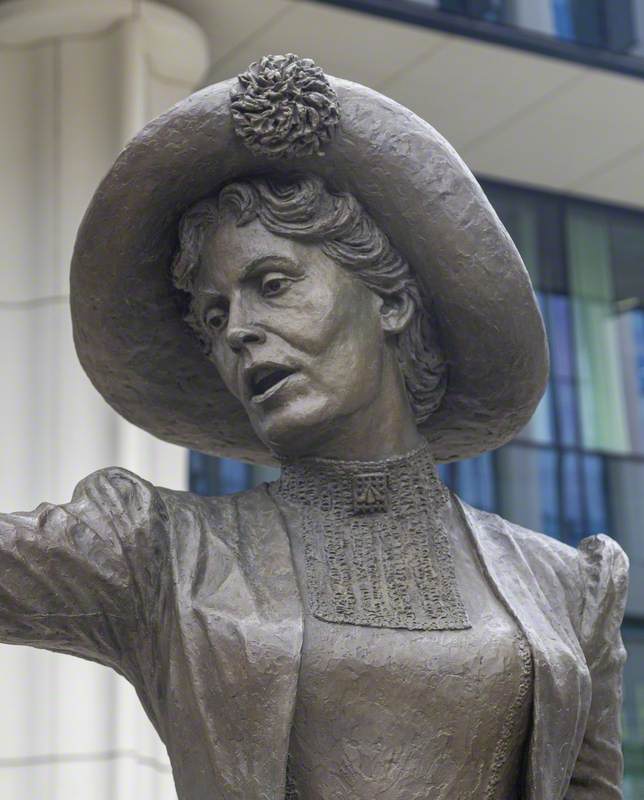 How can we tell stories through sculpture?

This Art and Design and History resource offers a series of activities that can be used together as a lesson plan or as individual components to integrate into your own scheme of work. It can be used to:

It was devised for Key Stage 3/Level 3 but may also suit Key Stage 4/Level 4.

Art and design
- Students use their knowledge about the work of other artists to enrich and inform their work
- Students explore, experiment with and apply the visual, tactile and sensory language of art

In December 2018, a sculpture of Emmeline Pankhurst, 'Rise up, women' (Emmeline Pankhurst, 1858–1928), was unveiled in the city of Manchester. In a public vote, Pankhurst was chosen ahead of Victorian novelist Elizabeth Gaskell, the anti-racism campaigner Louise Da-Cocodia and Labour MP Ellen Wilkinson. At the time of its unveiling, it was the first and only statue of a woman in Manchester that wasn't of Queen Victoria. This short video of the public unveiling of the statue gives a little more information about Pankhurst and her legacy.


Film credit: Huckleberry Films and the Our Emmeline Project

Born in Moss Side, Manchester in 1858, Emmeline Pankhurst was a key member of the UK suffragette movement that campaigned for women's right to vote. She co-founded and led the Women's Social and Political Union, a movement that became dedicated to civil disobedience and direct action. Their motto was 'deeds, not words.'

In this video, Hazel Reeves discusses the statue's pose and explains how she worked with model Sarah Jenkins to capture the pose during the sculpture's development. At 2 minutes 22 seconds, Hazel demonstrates how to copy the pose, so you might want to clear some space so the class can get up and follow Hazel's instructions.

After watching the video, discuss: 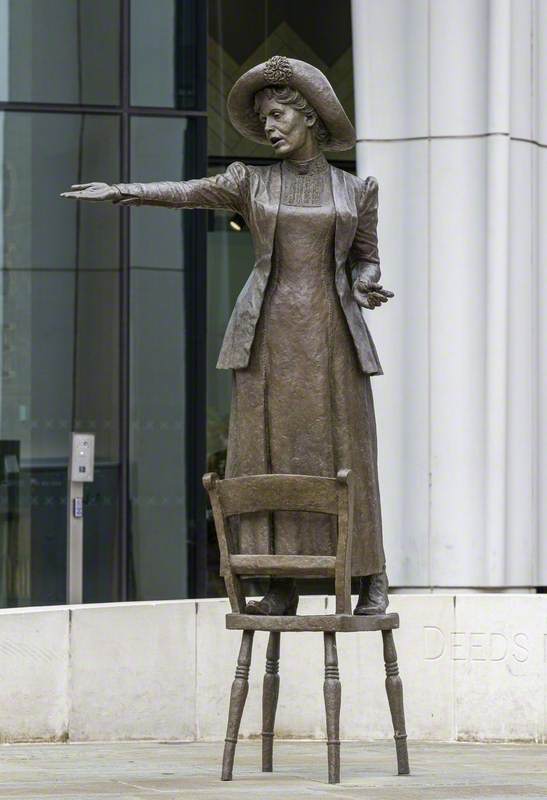 After Pankhurst was chosen as the subject for a statue, the public selected a design by award-winning sculptor Hazel Reeves. Hazel described the story and the intention behind the sculpture she created:

'As a sculptor, I can't rely on words. My stories need to be conveyed through the sculpture itself and its surroundings. From every angle, the statue needs to engage the passing crowds: to make them stop, walk all around it, have a selfie with it, be inspired to find out more.

I capture Emmeline as the courageous, determined and dignified activist, at a pivotal point – 1908/1909 – in the struggle for gaining the right to vote (women's suffrage). Angered by the government repeatedly breaking their promises, enough was enough, time for action. The suffragettes are on the streets, ringing bells, summoning people from their homes and offices. Someone grabs a kitchen chair and the five-foot Emmeline climbs atop. We catch her mid-rousing speech, arm-outstretched, urging women to rise up and demand their right to vote.'

Hazel Reeves explains the development of this sculpture, from initial drawings to final fabrication.

Hazel began the process of creating the sculpture with research:

'I read Emmeline Pankhurst's fascinating autobiography, My Own Story. It's here that she talks of the suffragettes' rallying-cry, "Rise up, women".

At this stage I start collecting photos of Emmeline and other suffragettes, to inspire me.'

After her research, Hazel moved to observation and drawing:

'Before I even do any drawings, I often work with a live model, dressed-up, to try out poses. Then I start to put my ideas down on paper before I start sculpting a small model (or maquette).'

Hazel started working in three dimensions by making a maquette:

'I start with a rough maquette in wax or clay, before I work on the final detailed maquette, which is usually cast in bronze. Here you can see the rough maquette of Our Emmeline I made in wax and photographed from all sides. Again, I have focused on the gesture of the statue rather than the detail, which comes later.'

'The next stage is scaling it up to the full size – 230 cm tall including the chair. See the tiny Emmeline maquette next to the metal armature for the full-size statue. What was the next step? Applying half a tonne of clay to the armature! This final clay model of Emmeline was then cast in bronze for the final public sculpture.'

Research: what stories are other statues telling us?

Ask your students to select a statue that they believe depicts an interesting story, either from the images below, or by searching through images of statues on Art UK. Get them to consider what story their statue is telling, and to also have a go at adopting the statue's stance – does this help them understand what the sculptor is trying to achieve?

The examples below include Courage Calls to Courage Everywhere, a model of the statue of the suffragist Millicent Fawcett (1847–1929) by Gillian Wearing. The final statue was unveiled in Parliament Square, London, in 2018.

There is also another of Hazel Reeves' sculptures, The Cracker Packers. These figures celebrate the lives of working women – the 'cracker packers' of the artwork's title, who worked in the Carr's (now McVitie's) biscuit factory in Carlisle. Current and retired factory workers helped her to design the statue pose during a workshop. It was unveiled on International Women's Day, 8th March 2018.

Use this quote from Hazel Reeves to prompt your class to create their own statues:

'When I was young, I never noticed statues on the streets. Why? Because they weren't relevant to me. I didn't see someone like me. It was only when I became a sculptor I started to notice statues. And then I became much more aware of whose faces I didn't see celebrated in bronze. Who do you think is missing?

If you were to commission a statue of someone, who would it be? And why do you think they deserve a statue?'

Your class can follow a similar process to Hazel to create an initial design for a statue. The stages may look like this:

'Show another student your favourite pose for your statue. Do they understand the story you are trying to tell? Is there something interesting for them to see from every direction, as they walk around you?

In your statue design, include additional details that help to tell the story. For example, with my Emmeline Pankhurst statue, I included a brooch at her throat that was awarded to those suffragettes who had been on hunger strike in prison.'

To get a better sense of how the statue will look in three dimensions, task your students with completing four drawings of their proposed statue on A4 card, from different views – from the front, left-side, right-side and back. They may want to take turns acting as a model for a partner while they draw.

Students can stick their four drawings together to create a four-sided, standing drawing of their statue (they may need to cut away some of the excess card around their drawings to do this).

For a longer project, you can work with your students to create a small maquette of their design. The materials required are:

The armature can be made of flexible aluminium wire attached to a wooden base or sections of wire pierced into a ball of aluminium foil. It may even be formed of something simpler like bamboo skewers. An example of a simple armature made out of wire can be seen in our clay modelling demonstration video.

Once all of the students have completed their maquettes, ask them to share their design with others and explain the thinking behind their design and the choices they made.

A film about 'Rise Up, Women' by students of Chorlton High School
Hazel Reeves' website
Portraits and films about the Pankhursts at the National Portrait Gallery
Explore the campaign for women's suffrage at the British Library
Votes for women learning resources from People's History Museum