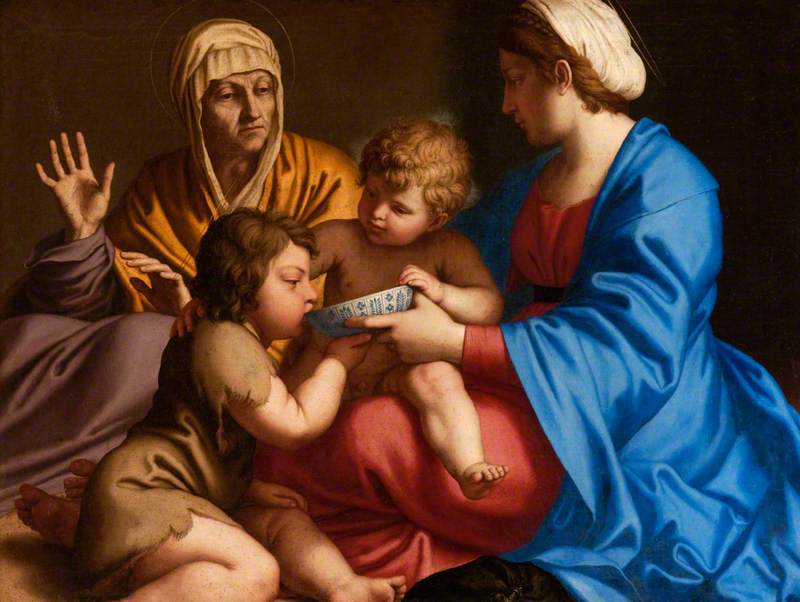 Virgin and Child with Saint Elisabeth and Child Baptist 1640 (?)

(b Sassoferrato, 29 Aug. 1609; d Florence or Rome, 8 Aug. 1685). Italian painter, known by the name of his town of birth and active in nearby Urbino and other cities of central Italy, notably Rome (where he is said to have been a pupil of Domenichino) and Perugia. He did some portraits, but specialized in religious works painted in an extremely sweet, almost Peruginesque style. They are very clearly drawn and pure in colouring and totally un-Baroque in feeling—indeed, they have a deliberately archaic quality that brings the paintings of the Nazarenes to mind. Little is known of his life (in the 18th century it was evidently generally believed he was a contemporary of Raphael) and few of his pictures are dated or datable; they seem to have been in great demand, however, as his compositions often exist in numerous very similar versions.

Read more
Most of them were presumably done for private collectors, as few are in churches (the most notable exception is the Mystic Marriage of St Catherine, 1643, in S. Sabina, Rome). Examples of his work are in many galleries (including the National Gallery and Wallace Coll., London), and a fine collection of his drawings (virtually his entire surviving output as a draughtsman) is in the Royal Library at Windsor Castle.