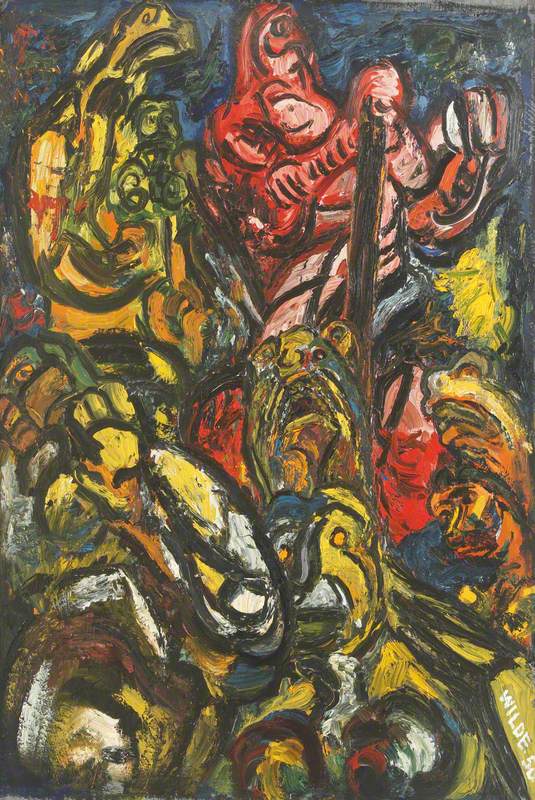 Fantasy on a Theme of the Cloister Figures 1950

Painter, draughtsman and textile designer, born in London, who lost an eye in a childhood accident. After working in a solicitor’s office Wilde attended Chelsea School of Art, 1926–31, and 1932–4, under Percy Hague Jowett and H S Williamson. His teachers Henry Moore and Graham Sutherland were strong advocates of Wilde’s work, as were the critics John Berger and David Sylvester. An early setback for Wilde was destruction of his work in the Blitz. Following service in the Pioneer Corps in World War II he had his first one-man show at the Hanover Gallery in 1948, also showing with AIA, NEAC, LG and elsewhere. He was early collected by men of perception, such as Sir Edward Marsh, Lord Clark and Peter Watson. Wilde’s work is usually abstract, and he employed a unique style of line and colour, as seen in the Tate Gallery’s examples: Fata Morgana, of 1949, and Red Composition, of 1952.

Read more
In 1951 he designed the cover for the catalogue of the Festival of Britain show Sixty Paintings for ’51. Poor health, including mental hospital treatment, hindered Wilde’s output. An amusing cameo of him is contained in Nicolette Devas’ autobiography Two Flamboyant Fathers. The ICA gave Wilde a retrospective in 1955 and October Gallery another in 1988, with a further show in 2002 and one at The Millinery Works, 2004. That exhibition included Wilde’s striking gouache on paper The Art Critic David Sylvester. Wilde has been mistakenly identified as the dramatist Oscar Wilde’s son, also as the model for Gulley Jimson in Joyce Cary’s 1944 novel The Horse’s Mouth, although he did know Cary. Lived for a time at Cudham, Kent.