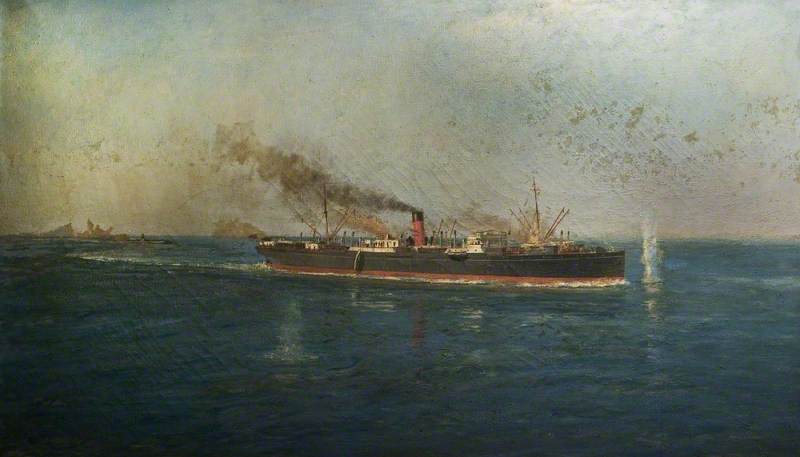 Burgess was only son of a former Royal Naval lieutenant, James Ogle Burgess, who emigrated to Tasmania in 1872. There he became a government employee and land surveyor, and he was also a competent topographical artist. As a result of helping J. R. Scott and R. M. Johnston in their survey of south-east Tasmania he met and married Dinah Eleanor (‘Nellie’) Evans of Newtown, the sister of Scott’s wife, and subsequently became a district surveyor in New South Wales. Their son Arthur was born at Bombala (halfway between Sydney and Melbourne) on 6th January 1879 and was brought up in Grafton and Lismore, NSW. In his later ‘Who’s Who’ entry he said he was educated at ‘Hutchins, Hobart [Tasmania] and Armidale, NSW’; the latter was the then-new Armidale School, founded on the pattern of an English public school in 1894. After leaving, he completed a three-year apprenticeship with P. F. Spencer, a Sydney architect, but with an early talent in art and an interest in marine painting, used his leisure time to sketch in Sydney Harbour. He took evening drawing classes with Frank Mahoney (1863–1916), painter and ‘Sydney Bulletin’ illustrator, and later enrolled as a pupil of the Australian seascape painter William Lister Lister (1859–1943). Lister had trained as a marine engineer in England but returned to Sydney as an artist in 1888 and was later President of the Australian Royal Art Society.

Read more
Burgess exhibited at the Art Society of Tasmania in 1899 and 1900, from ‘Eaglesfield’, Darlinghurst Road, Sydney, and at the (Royal) Art Society of New South Wales in 1901. Later that the year, aged 21 and encouraged by his mother, he went to England to pursue a painting career, primarily at St Ives as a then-thriving artists’ colony. In November 1901 he first attended the St Ives Art Club as a student of Julius Olsson, whom he found an exacting master: he was also one of Algernon Talmage, whose teaching style was more agreeably relaxed.

Burgess also met his wife Muriel Coldwell, a painter who attended the Slade School in 1897, while she was a seasonal art student in St Ives. She was a daughter of Robert Hanson Coldwell (1827–1899) a manufacturer and later army officer, and his wife Clare Victoria Hope-Edwardes (1851–1924) and was born at Meole Brace, Shropshire, on 6 October 1878. The Hope-Edwardes family owned the 1200-acre Netley estate at Dorrington, Shropshire, where Clare’s father Thomas built Netley Hall in the 1850s. It was inherited by Muriel’s brother Vincent (b.1880) who died as a war casualty in Iraq in 1916, then his wife Adeline (née Morris, 1880–1948) and their only daughter Clare Mary (who changed her name to Hope-Edwardes). Muriel exhibited at Birmingham in 1903–05 and she and Burgess married at Meole Brace on 11th or 19th January 1911. Their only child, Nancy Juliet, born in Hampstead on 5th September 1915 is noted in the 1939 Register as living at Netley Hall with Adeline and Clare, so the Shropshire connection remained close: the Register gives her birth date as 1st September. If Burgess’s English marriage – and later the First World War – deferred any thought of return to Australia, this was confirmed by his widowed mother’s move to England in the 1920s from Flint House, New Town, Tasmania, following the death of her brother there.

Burgess first exhibited at the RA in 1904 and by 1905 had set himself up in London. This appears to have been at No. 2, Marlborough Studios, 12A Finchley Road, which was still his address in 1910. He also joined the Langham Sketch Club, as had his former teacher Frank Mahoney who had moved to London in 1901, and through a naval contact of his father gained unrestricted access to draw and paint in the Royal Naval yards at Portsmouth. In this way he began to make a name for himself as a marine painter, including through work for the ‘Illustrated London News’, ‘The Sphere’, ‘The Graphic’ and for shipping companies including Cammell Laird during the First World War. In 1913 he was commissioned by the Australian Commonwealth government to paint (in London) the entry of the cruisers ‘Australia’, ‘Sydney’ and ‘Melbourne’, and the destroyers of the new Australian Commonwealth fleet, to Sydney Harbour. This canvas (1914) was later hung in Parliament House, Canberra, and is now in the Art Gallery of New South Wales with his separate ship portraits of HMAS ‘Commonwealth’ and ‘Australia’, both later additions. In 1915 his painting of Admiral Beatty’s flagship ‘Lion’ at the Battle of the Dogger Bank (now in the Imperial War Museum) was shown at the RA and became the first of a number of successful war subjects. They included some aviation ones, possibly in emulation of W. L. Wyllie – his leading British marine contemporary, who was also an effective wartime aviation painter. In 1917 Burgess became an official Australian war artist and, like Wyllie and others, witnessed the surrender of the German Fleet in the Firth of Forth in 1918. An undated oil of that event is in the Manx Museum.

From at least 1919, though probably from before the birth of their daughter in 1915, the Burgesses lived at 8 Stanley Gardens, Belsize Park, and the September 1939 register records him there as a ‘Naval Artist’, with the sculptor Alfred Pegram as his neighbour at no. 10: later that year the street name was changed to Primrose Gardens. The house had previously been church-owned and it was only after buying it that Burgess realised that a doorway at the end of the garden led to a patch of waste land that backed onto a mews and was also part of the property. Burgess then built a ‘D-I-Y’ studio there which his grandson Stephen recalls as being raised off the ground, with a thatched roof and a skylight. From 1922 to 1930 Burgess was art editor and principal artist of ‘Brassey’s Naval and Shipping Annual’. With William Russell-Flint, he was also commissioned by the ILN to record the growing interwar interest in winter sports in the Swiss Alps and Alpine paintings thereby joined marine ones in his exhibiting record. In both 1928 and 1932 his work featured in the official art competitions related to the summer Olympics in Amsterdam and Los Angeles, respectively. In 1934 he wrote a series of articles on marine painting for ‘The Artist’ magazine and he did several popular calendars for the paper manufacturer, Wiggins Teape.

Burgess’s interwar shipbuilder and shipping clients extended to include P&O, the Glen Line, the Guinea Gulf Line and T. J. Harrison and his understanding of naval architecture allowed him to paint ships based on blueprint plans for them. During the Second World War, in which he was again an official Australian war artist, his work covered many of its aspects at sea, including as magazine illustrations. Some were painted in his London studio until that was reportedly damaged in the Blitz but he also worked in Ludlow, where his brother-in-law Guy Hope Coldwell (1883–1948) was a farmer, and his wife Muriel in particular often stayed with her cousin Clare (whose married name was More) at Netley Hall, where their eldest grandchild, Julia Anne Bartley, was born on 14th April 1940. Later in the war Muriel Burgess worked for Holy Trinity, Brompton, renting a small house nearby in Kensington from a family friend.

Burgess himself continued travelling extensively to ports round the country during the war to make sketches. More than any other marine artist, he recorded shipping at the Clyde Anchorage Emergency Port devised and operated for the Ministry of War Transport by Scruttons Ltd, the prominent London-based stevedoring company. This may have been done for them since six related paintings are reproduced in ‘The History of Scruttons’ by a former director of the company, A. E. Jeffery: this was privately published by it in 1970. One of these paintings, of Craigendoran Pier with ocean-going ships in the anchorage out towards Gourock, is now in the Scottish Maritime Museum. Of the 39 paintings listed by Art UK only seven are not specific ship portraits (naval and mercantile) and only three are coastal beach scenes. An undated ship portrait of the steam frigate ‘Birkenhead’ of 1845, now in the Williamson Art Gallery, Birkenhead and probably done for Cammell Laird, who built the ship, is the only ‘historical’ subject among them although he did do others, and some non-marine landscapes.

After the war Burgess spent his last years largely recording activity in the Thames and the London Docks, from the Pool to Tilbury. In August 1952 he and his wife visited Australia, sailing first-class from Liverpool to Melbourne in the ‘Hector’ (Blue Funnel Line). Although they returned before the new Queen’s first royal visit early in 1954, he subsequently did a number of paintings of her arrival in Sydney Harbour in the P&O liner ‘Gothic’, which was used there as a temporary royal yacht.

In 1954 the National Maritime Museum, Greenwich, bought Burgess’s large painting of ‘The Brotherhood of Seamen’, showing an imagined incident of the SS ‘Glengyle’ rescuing lifeboat survivors. In conversation with him at the time, E. H. H. Archibald, its curator of oil paintings, recalled him saying that success had come too late for him to enjoy. It had nonetheless been considerable. His exhibition record included 57 paintings at the Royal Academy, works shown at the Paris Salon and the St Ives Society of Artists (1932–49), of which he was a member from 1931 to 1949; he also exhibited at, and was a member of, the Royal Institute of Painters in Watercolours, the Royal Institute of Oil Painters, the Royal British Colonial Society of Artists and the Pastel Society. Having been a founder member of the (now Royal) Society of Marine Artists in 1939 he was its vice-president at the time of his death. He was also a founder member of the Wapping Group and a member of the Chelsea Arts Club and (as already noted) the Langham Sketch Club.
In ‘Who’s Who’ Burgess listed ‘Australian War Records, Canberra’ as among his publications (though this may refer to his artwork for them) and gave ‘fishing’ as his recreation. It was a major one in the interwar years when he pursued it in Wales and Scotland whenever possible. He and his wife Muriel were also noted for befriending and helping other artists including Emmanuel and Ethel Carrick Fox and William Lee Hankey. Hankey painted his portrait in fishing gear (private collection) and Eleanor Charlesworth also accompanied their fishing trips.

The Burgesses continued to live at 8 Primrose Gardens, Belsize Park, to his death on 16th April 1957, aged 78. His published estate at probate was £45,440 and his widow Muriel died at Dorking, Surrey, in 1960. They were survived by their daughter Nancy, who had married George A. S. Bartley in Kensington in the second quarter of 1939. After Julia Ann (1940–1986, already mentioned), the Bartleys had two sons: Alan Hugh (b.23 August 1942) and Stephen George, born at Hampstead in the third quarter of 1948. The latter ran the Stephen Bartley Gallery at 62 Old Church Street, Chelsea, in the 1980s, which subsequently became the Bartley Drey Gallery from 1994 to about 2001. A retrospective exhibition of Burgess’s work was held there in 1988, at the time the Australian bicentenary, and another partnered by Bartley Drey at the Malcolm Innes Gallery, 7 Bury Street, London, in 1996. Details of earlier retrospectives at Harrogate in 1957/8 and at the Alpine Gallery, London, in 1958 remain to be confirmed.

Adapted from an account by the artist's grandson, Stephen Bartley