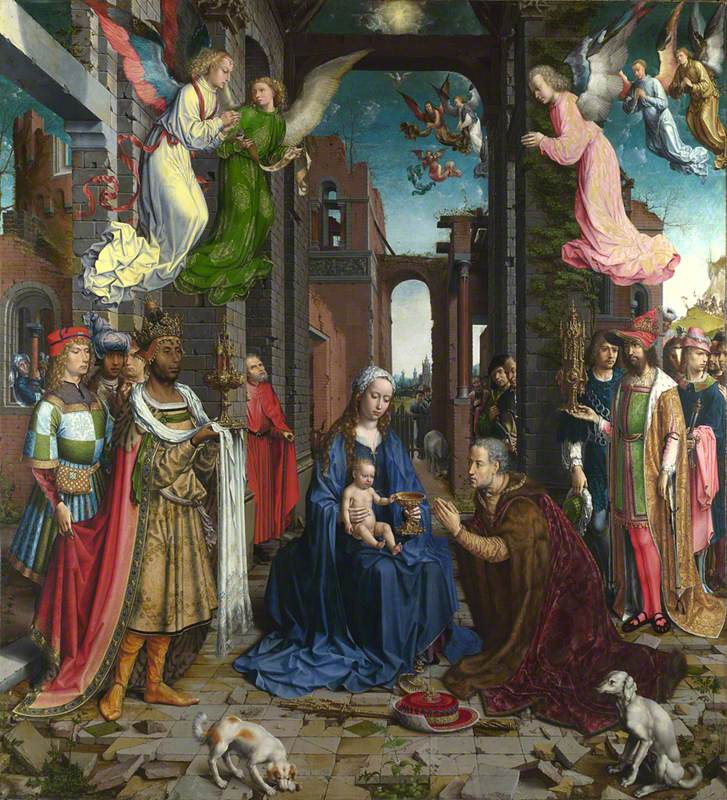 The Adoration of the Kings

This is the first Superpower of Looking History category lesson which focuses on Jan Gossaert's The Adoration of the Kings, painted between 1510 and 1515.

The following resources complete this category:

You can find out more about The Superpower of Looking including introductory films, teacher guidance and SEND/ASN approach on the Superpower homepage.

This resource is an innovative prototype developed from a successful schools' pilot. Help us develop it further by taking part in our final schools' pilot in early 2022, or get in touch with your feedback via learning@artuk.org

Art and design
- Look at and talk about the work of artists, designers and craftsworkers from their own and other cultures; appreciate methods used in the resource materials and use their appreciation to stimulate personal ideas and engage with informed art making
- Develop their understanding of the visual elements of colour, tone, line, shape, form, space, texture and pattern to communicate their ideas
- Evaluate their own and others’ work and how it was made, explain and share their ideas, discuss difficulties and review and modify work to find solutions

Art and design
- I can create and present work that shows developing skill in using the visual elements and concepts (EXA 2-03a)
- Through observing and recording from my experiences across the curriculum, I can create images and objects which show my awareness and recognition of detail (EXA 2-04a)
- Inspired by a range of stimuli, I can express and communicate my ideas, thoughts and feelings through activities within art and design (EXA 2-05a)
- I can respond to the work of artists and designers by discussing my thoughts and feelings. I can give and accept constructive comment on my own and others' work (EXA 2-07a)

Art and design
- Describe and make comparisons between their own work and that of others
- Experiment with and examine the methods used by other artists from different periods, places and cultures
- Evaluate the methods and results of their own work and that of their fellow pupils
- Pupils should be stimulated and inspired by: other artists; methods and processes; media; styles; ideas
- Explore, experiment with and apply the elements of the visual, tactile and sensory language of art, craft and design which include: line, tone, colour, pattern, texture, shape and form

History paintings relate important stories and the category includes religious, mythological and historical scenes. Often these works contain an important message and the size of the work (scale) can be significant as a result. This is the case for the large religious painting focused on in this lesson.

This large painting illustrates the Biblical story of the three wise kings, who came to worship the newly born Jesus Christ and to give him their gifts. They had travelled a long way, following a mysterious star from the east that eventually led them to the stable in Bethlehem where Christ was born. His parents, Mary and Joseph, had not been able to find a room in an inn. In Gossaert's scene, the stable has been substituted for a palace, now in ruins. Two shepherds are also looking on in the background, and beyond them, an angel sent by God is telling shepherds about the birth of Christ too.

The artist, Jan Gossaert lived in Northern Europe, where new techniques in oil painting had been developed to such a degree that every texture and minute detail could be described in the most astonishing way. Gossaert seems to have painted this altarpiece between 1510 and 1515 for a church in Belgium known as St Adrian at Geraardsbergen in East Flanders. It is said that the church had a piece of clothing belonging to one of the Three Kings in its possession in 1519, so this may be the reason Gossaert has painted the Kings' clothing in such rich detail.

Tip: if you'd like more insight into the painting before teaching the lesson, an audio description is available, which has been developed for students with blindness or visual impairment to take part.

Ask them to describe the figures and what's going on in the background and around them.

Don't tell them too much about what the picture represents at this stage. Once you have interpreted an image, or been told what to see, it is difficult to look freshly and critically at it or appreciate each other's views.

For students with blindness or visual impairment, an audio description of the painting is available to be listened to during this stage.

Tip: in class, use the zoom feature on the image below to look closer at details. You can open a full-screen version on The National Gallery's website.

Given the richness of Gossaert's painting, there is much to spot and discover – this activity will encourage your students to keep looking. They will need a pen or pencil and small squares of white paper (or sticky note pads).

Split your students into pairs. Ask them to take turns looking at the picture and saying 'I spy something beginning with the letter...'. The other student should then do a quick sketch of what they think their partner is looking at.

After a few rounds of the game, come together again as a class and make a circle around a clear space in the room. Ask your students to take turns laying down one of their sketches on the ground, placing it in relation to the other sketches and where the figure or object is located in The Adoration of the Kings.

You can extend this activity by asking your students to split the sketches into two groups: drawings of objects connected with heaven (e.g. angels, bright star) and those connected with earth (e.g. dogs sniffing around, cracked floor).

Now we can start to explore the 'elements' of the painting. Use the Superpower Kit to ask questions about the work and spark a discussion.

We'd suggest focusing on the following areas to help your students 'read' the image (click to open the relevant Superpower Kit section):

Ask your students to evidence their points, e.g. where exactly are they looking when they make a statement? Can everybody see what they see?

To support those teaching The Superpower of Looking for the first time, this additional stage can be used when teaching the first lesson in each category.

During this stage, you can introduce knowledge from the context box while asking these bespoke questions on the painting. If you've already covered any question through previous discussion, feel free to move on.

If it's required, guidance on what to look for can be found below the sets of questions. 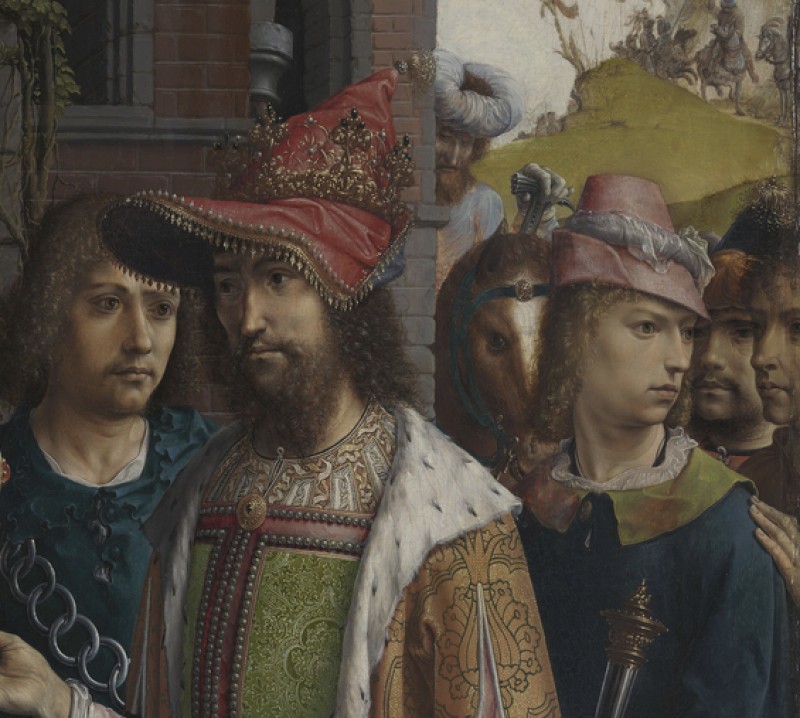 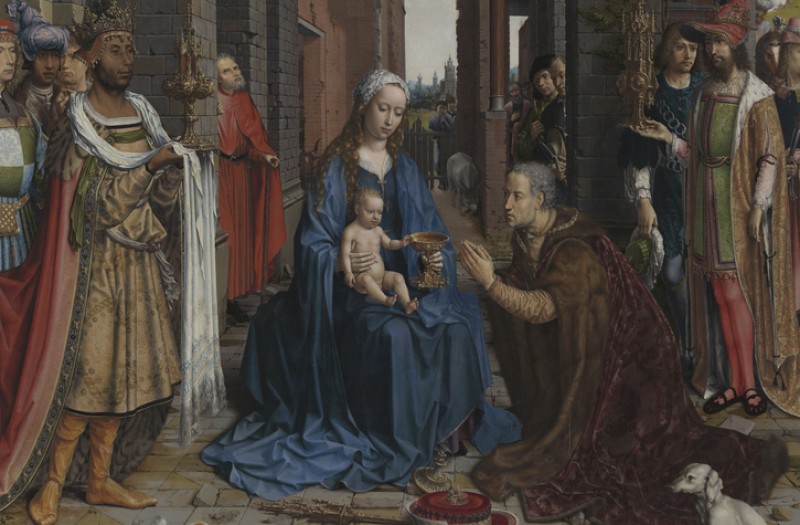 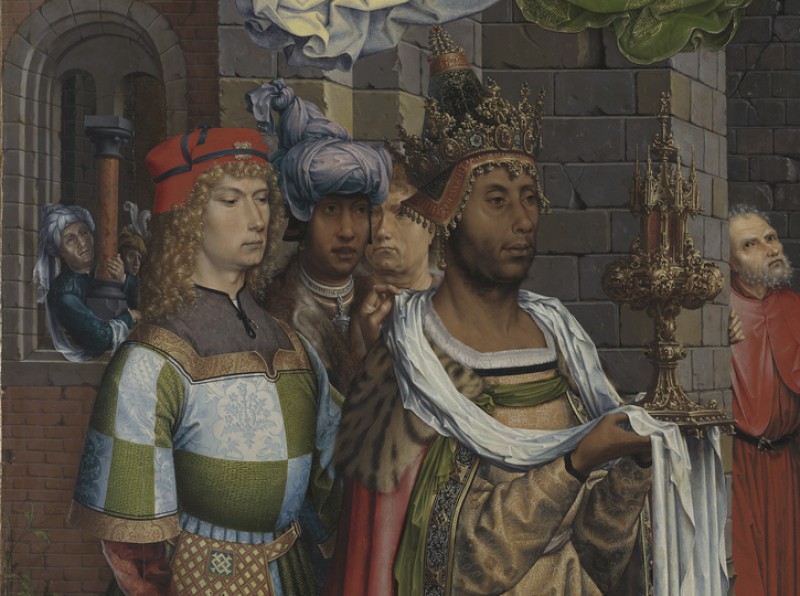 Christ and Mary are central, with the Kings also in the foreground. Christ is seated as if on a throne and holds a gold coin.

Baltazar has an attendant who carries his cape. He is wearing a crown, pearls, gold, lynx fur and leather boots so fine we see the form of his feet beneath the surface. Caspar is also wearing gold and jewels, as well expensive fabrics including fur and a patterned robe. He is kneeling respectfully before Christ with his hands held together as though in prayer. Baltazar stands with his gift offered out to Christ.

There is text in blue at the bottom of Baltazar's scarf. There is writing on the scroll held by the angel in green on the left which translates to 'glory to God in the highest'. Finally, on the lid of the chalice of myrrh at the Virgin's feet presented by Caspar, his name is written.

While some of the men look beyond the edge of the painting, the second man from the right is looking directly in our direction. The horse is also looking at us! He is carrying an old man who looks weary and seems to be using a stick for further support.

The tenth angel is hidden: it is peeping through the crack in a wall to the right of Joseph behind an ox. We can see the white edge of one of its wings.

There are two dogs, an ox and an ass. This lets us know that the scene is set in their stable.

Christ and Mary form a triangle on the central vertical axis. Joseph mirrors the curve of Mary, but is more in the background.

The artist appears to have used a ruler to draw the lines of perspective in the tiled flooring – we can tell they converge (meet) as they recede towards the horizon line. This creates the illusion of three-dimensional space which draws us right back into the composition. The architecture is also notably linear, especially in contrast with the rounded forms of the many figures in the scene.

In place of the traditional stable, the ruins of an ancient palace frame the Virgin and Christ child. So noticeable are the large chips in the masonry (stone), it is thought we are supposed to realise that we are witnessing a transformative moment in time from an old world to a new one.

In the distance, we see a naturalistic landscape and diminishing figures who are all intending to gather at the scene. On the far right, we see a winding hilltop path with a continuous procession of horseback riders, all heading this way too.

Blue is a highly symbolic colour as ultramarine blue was extremely costly at this time and was seen as a heavenly colour. Blue has connotations of divineness in other major world religions too, such as Islam.

The scene appears bathed in natural daylight which helps convey a celebratory mood. However, an oversized star, the Star of Bethlehem, dominates the scene from high in the sky. Stars are usually a night-time phenomenon.

There are differences in how the fabrics Baltazar wears interact with light: the thick furs absorb light while the clean white scarf has many of its shadows obliterated by the light (as often happens when bright light hits a white fabric surface), and his precious gold vessel reveals its hard shiny surface by reflecting the light. All of these plays on light emphasise that Baltazar's belongings are precious and expensive and that this is a majestic event.

The majesty of all of the kings' garments and precious gifts are conveyed with the use of light: gold threads are given a light-reflective sheen and jewels adorning fabrics have daubs of bright white to simulate reflective and glistening surfaces. In contrast, rich fur garments and stone tiles absorb the light. The subtle play of light and shade even tells us how soft Baltazar’s leather boots are because they reveal the form of his toes beneath the hide.

Ask your students: how interested are they in the image now? Why?

At this point, you may also want to give your students some time to record and review their observations in a sketchbook on their own or in pairs.

Compare Gossaert's The Adoration of the Kings with either or both of the following two artworks:

In order to support the discussion with your students, you may wish to focus on the following areas of the Superpower Kit: Composition and Figures (particularly Gesture and Expression).

Extend into a Religious Studies lesson by exploring art's relationship with religion.

Gossaert’s painting is one of many depictions of The Adoration of the Kings connected with the Christian faith. It is an example of how interlinked art and religion have been across time.

With your class, either:

You can find artworks by searching through our Topic page on Religion and belief in advance, or by searching the specific religion using the artworks search bar. Some examples are provided below.